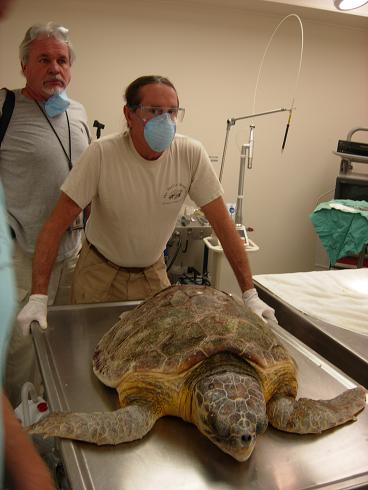 Iain is a sub adult Loggerhead sea turtle who came to The Turtle Hospital on June 26th 2009. Iain was captured during a Florida Bay Research Project. For research purposes healthy turtles are captured, the species of the sea turtle is noted, their shell length is measured and they are weighed. Researchers often take blood samples or flush out their stomachs to see what they have eaten. These turtles are then tagged and released for future identification.

However, Iain had a small Fibropapilloma tumor growing underneath his left flipper. Fibropapilloma is typically found in green sea turtles, but this virus is now found on all species of sea turtle. Because of this tumor, Iain was brought to The Turtle Hospital for treatment. 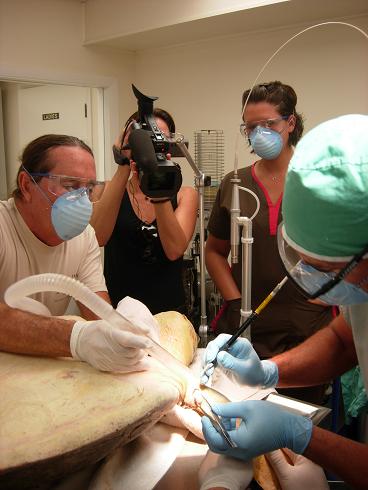 Iain received surgery on July 7th 2009 to remove the Fibropapilloma tumors. Pictured above is Dr. Doug Mader (Marathon Veterinary Hospital) surgically removing the tumors with a CO2 laser scalpel. Iain is currently recovering well in his tank. Iain will remain at The Hospital for the next year under observation to ensure there are no re-growths. This gives Turtle Hospital staff a great opportunity to further study the affects of Fibropapilloma on a different species of sea turtle.