Home  » Uncategorized » If You Build It, They Will Come…

If You Build It, They Will Come…

Ordinarily, it takes a considerable amount of effort to rescue a sick or injured sea turtle. Sick turtles are usually found floating out in the ocean by boaters and are then rescued and brought to the Turtle Hospital for treatment. Over the years, thousands of turtles have been rescued in this fashion, rehabilitated and then released. Well, the word must have gotten out that sick sea turtles qualify for free medical care at the Turtle Hospital in Marathon because for the first time in our history a sick turtle actually CAME TO US!

On Sunday morning, March 29th, a young Loggerhead sea turtle was spotted in the harbor behind our facility by one of our staff. It is not very common to see a turtle in the harbor and we all gathered to look. She appeared to be emaciated and had large barnacles on her carapace, which are an indication that the turtle is sick. Two dinghies were deployed and we waited with nets to catch her the next time she surfaced. After 45 tedious minutes of waiting at the ready, she finally surfaced and was able to be pulled on board. 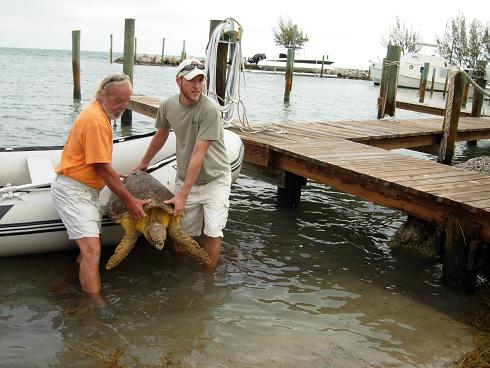 Kincaid, as she was named, was checked out and her blood work has revealed that she is septic, which basically means she is suffering an infection of the blood stream. After a few weeks of antibiotics and TLC, she should be able to be released — fifty feet from her current rehab pool!

This was by far the easiest rescue to date! If there was ever a case for evolution… this would seem to be evidence like no other —  a sick animal arriving at the hospital on its own! Of course, we could only wish this were true.

Be sure to visit the site again to see how she’s doing, or stop in to see her and the 43 other turtle patients here at the Hospital! Call 305-743-2552 for information.