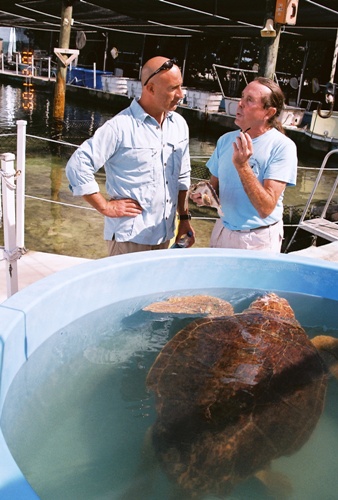 Jim Cantore from The Weather Channel arrived at The Turtle Hospital on Wednesday, October 21st to film for his new show Cantore Stories. Jim Cantore travels around the world filming unique and extreme weather conditions and the stories behind the people that adapt to living there. At The Turtle Hospital, Jim went even deeper into the stories of survival by including Sea Turtles in his half hour show. During filming the crew was able to witness surgical procedures performed at The Turtle Hospital by Dr. Kristen Hall (Marathon Veterinary Hospital) such as an endoscope and removal of Fibropapilloma tumors. Filming concluded with Jim’s assistance in releasing Karl, a 211 pound male Loggerhead sea turtle. 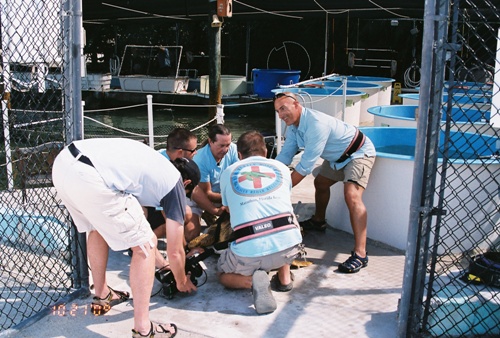 Karl was released from Sombrero Beach as a large crowd gathered to cheer Karl on and watch him return to the ocean. Karl was admitted to the hospital in July after suffering a boat strike to the head and an impaction from shell ingestion. After only 3 short months of treatment, he was ready to go home! The Turtle Hospital would like to thank the well-wishers who came out to show their support and help us say goodbye to Karl. We would also like to thank Jim Cantore and The Weather Channel for assisting in the release and including our facility in their programming.