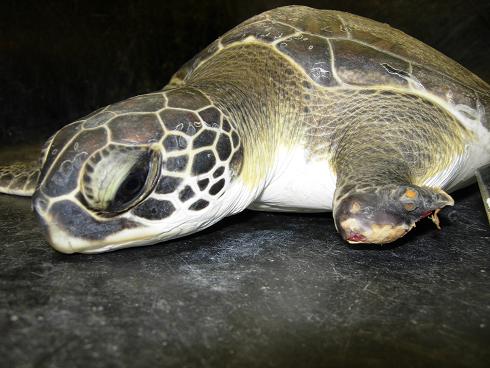 Joe, a 3 pound juvenile Green sea turtle was rescued December 10th. Fishermen off of the Saddlebunch Keys discovered a small sea turtle struggling to swim. Upon rescue, they realized this was because Joe only had two flippers! Once admitted to The Turtle Hospital staff determined that Joe was most likely born with only three flippers. Unfortunately for Joe, it appears as though he was most likely attacked by a predator which removed a significant portion of his left front flipper as well.

But Joe is a survivor! Even with only two remaining flippers (both on the right side!) Joe swims very well. He is able to eat on his own and continues to show improvements in his mobility everyday! Staff will continue to monitor his progress here at the hospital.