Join us for Xiomy’s Release!

Join us on Sunday, October 13th at 5:oo pm at Sombrero Beach

Xiomy is a loggerhead sea turtle that was rescued off of Islamorada on July 29, 2013. She was noticed by residents in Islamorada to be living in their back yard canal and frequently looking as though she was struggling and weak when swimming and coming up to the surface for air. It took a great team effort to rescue Xiomy. Area residents kept watchful eyes on Xiomy and keeping track of her location. The Turtle Hospital responded and launched in a kayak following Xiomy. Florida Wildlife Conservation was brought in to help because the tide was taking Xiomy out to sea quickly and a boat was needed. Xiomy was hoisted onto the FWC boat and taken to shore where she was loaded into the Turtle Hospital ambulance. 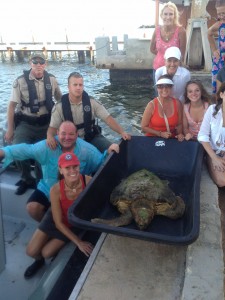 When the algae growth was cleaned off of Xiomy’s shell, the reason for her struggling was revealed. Xiomy had suffered a severe prop wound. Xiomy was treated at the hospital with natural honey for her wounds. 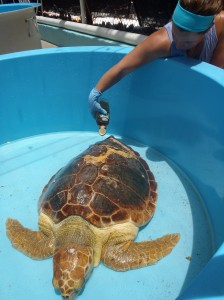 She received antibiotics, vitamins, and a healthy diet of squid, fish, and lobster. Xiomy is back in good health and ready to return to her ocean home.

Please join us as we wish Xiomy well on her release Sunday, October 13th and 5:00 pm at Sombrero Beach. Xiomy will arrive in the Turtle Hospital ambulance at 4:30 pm where staff will share her story, and the release will be promptly at 5:00 pm. See you there! 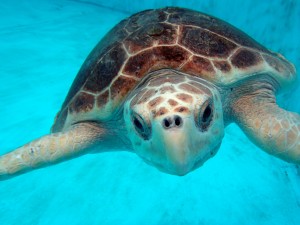