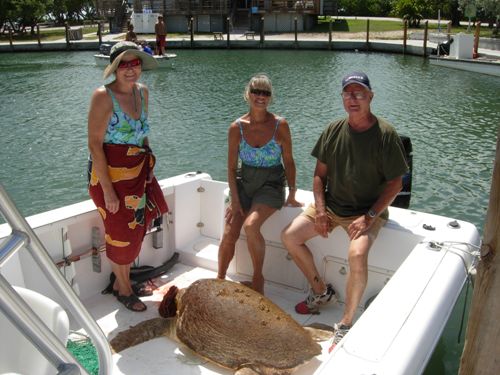 Karl, a 211 pound adult male Loggerhead was rescued on July 13th off Bahia Honda State Park. His rescuers (pictured above) noticed Karl was floating and immediately called The Turtle Hospital. With some amount of difficulty, Karl was safely netted and brought on board their boat. Karl was injured by a propeller which cut across the top of his head directly above his left eye. The beautiful crystal clear waters and warm weather in the keys brings out many boaters in the summertime, resulting in an increase in reports of sea turtles injured by boat hits. 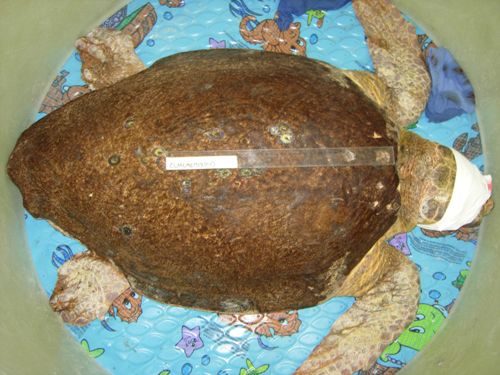 Back in the Emergency Room inside the Hospital Karl’s eye was inspected by Dr. Doug Mader (Marathon Veterinary Hospital). Although the injury is deep, and his salt gland exposed, we believe he will be able to use the injured eye. Karl is active, alert and his left eye is still responsive. Karl was given x-rays and it was determined that he is impacted with gravel and shells. Loggerhead sea turtles are carnivores and are rapidly loosing their major food sources. Lobster, crab and conch are what they prefer to dine on….and so do we! This leaves these massive turtles no choice but to snack on smaller crustaceans such as hermit crabs and snails, however they can not digest the shells. Once impacted with shells and waste, gas builds up inside the turtle leaving them floating, stuck at the surface. Because of this impaction, Karl was probably unable to dive down and escape the oncoming boat.

Karl is currently on antibiotics to prevent infection and his injury is tended to daily. We believe he will make a full recovery!