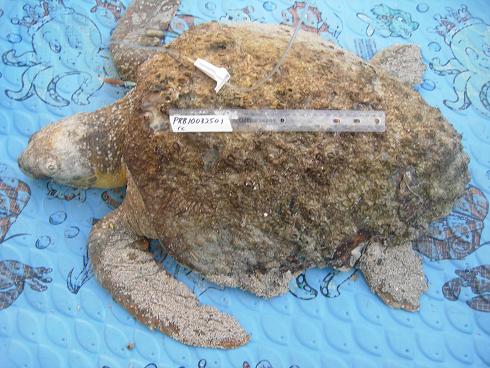 Kentucky, a small sub adult Loggerhead, was rescued March 25th from the beach at Sunshine Key. This thin sea turtle had suffered a shark bite on the left side of her body. Kentucky was already suffering from an infection which left her floating helplessly at the surface. While struggling to dive she may have attracted the large predator while splashing around on the surface. Luckily Kentucky was able to escape with only a minor injury. Currently she is being treated for an infection and the shark bite is tended to daily.

Dr. Mader (Marathon Veterinary Hospital) visited Kentucky to examine her shark bite. The injury has almost entirely healed and Kentucky has been given the ok for release!