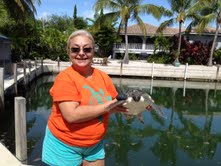 A little green sea turtle named Luna is very lucky to have been watched over so well by resident, Nancy Whitman, of Cudjoe Key. Luna was found weeks before prior to her rescue on July 25. This rescue wasn’t the first attempt but Nancy never forgot about the little turtle with tumors and continued to look out for her. It was a lucky day on the July 25 when she called our rescue line.  After the turtle ambulance pulled up it took only five minutes for Luna to come out of her hiding spot, under the canal wall, to come up for air. Turtle Rehabber, Marie Simpson, was standing above with a net and swooped her right out. Luna, named by Nancy, was in danger of losing her vision from the tumors and also had large ones around her front and back flipper which were slowing her down. The little turtle most likely started to live in the canal for safety since it was becoming harder for her to navigate in the big ocean. 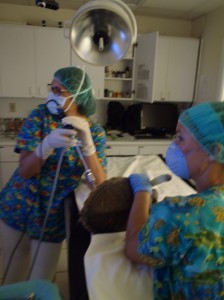 Luna has already received her first surgery in which we found out she was a girl during an endoscopy and also removed the tumors from her eyes and a large one on her flipper. Today she is doing so good and eats like a champ! You never see a single crumb in her tank. Weeks after her first surgery, on August 22, she received her final surgery and is now tumor free! Look for a picture of her new tumor free self to come in the near future.