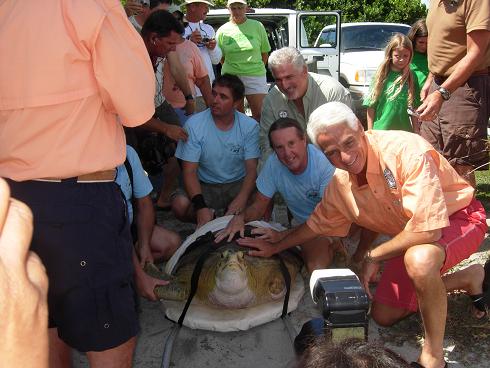 Margarita, a 280 lb. adult female Green sea turtle was released! Governor Charlie Crist, Commissioner Mario De Gennaro, FWC Chairman Rodney Barreto, Turtle Hospital Director Richie Moretti, Administrator Ryan Butts and Rehabilitation Specialist Tom Luebke assisted in returning Margarita to her ocean home. Margarita has been recovering at The Turtle Hospital since late May from a severe entanglement in trap lines. Sadly, her left front flipper was amputated due to the extent of her injury. However sea turtles are strong, adaptable animals that swim just fine with only one front flipper. Many sea turtles have been successfully released with only three flippers. 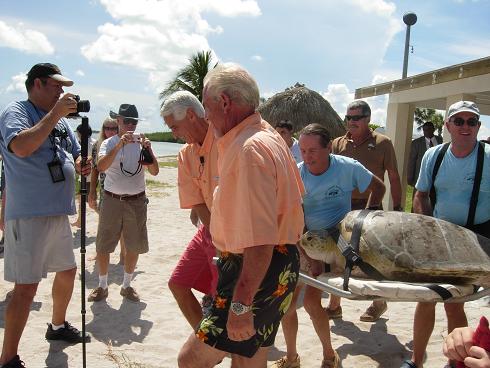 This very public release drew a large crowd of well-wishers as well as much media attention! The Turtle Hospital would like to thank everyone who came out to support the hospital and say goodbye to Margarita. Channel 4 news was also there to document and film her release and for more on the article and to view the video of her release you can follow this link to channel 4 news: http://cbs4.com/local/charlie.crist.margarita.2.1169874.html 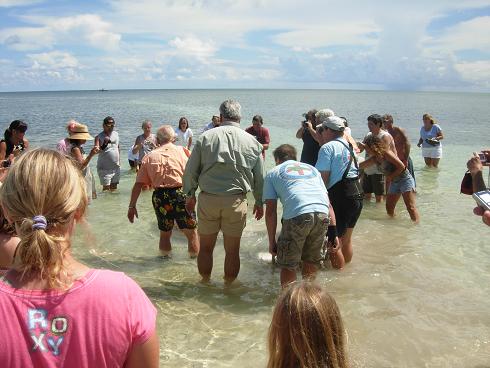 We say goodbye and good luck to Margarita! Hopefully next breeding season Margarita will return to the beach she was born, lay her eggs and contribute successfully to next year’s generation of Green sea turtle hatchlings.