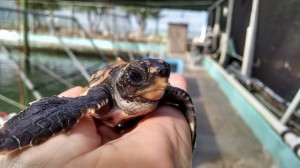 Turbo was hatched on Long Key, just north of our hospital in Marathon, Fl. Turbo is a Loggerhead Sea Turtle. When Turbo’s nest hatched in October of 2014 beach front lighting caused him and many of his siblings to become disoriented and head inland instead of out to the ocean. Sea turtle hatchlings crawl out of their nests at night and know what direction to travel by looking for the light from the sky reflecting off the ocean. Development of the beaches sea turtles have nested on for millions of years means that artificial lights can confuse these little babies. Instead of heading out to sea, Turbo headed inland and fell into a storm drain. Luckily for this little guy, he and many of his siblings were found by a Save-a-Turtle volunteer and brought to The Turtle Hospital for rehabilitation. All of his brothers and sisters were able to be released but Turbo was selected to join our “Head Start” program. This program will allow Turbo to safely survive the most dangerous time of a sea turtles’ life, the first few years. Only about 1 in 600 sea turtles make it past their first years of life as it is when they are most susceptible to predation. Once Turbo reaches 45cm in size he will be released with an increased chance of survival since he is larger.

Since Turbo is not a sick or injured turtle, while he is waiting for release he will be an educational ambassador for The Turtle Hospital. He will travel throughout the  Florida Keys teaching people about sea turtles and how to help protect them. 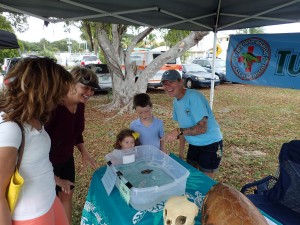 He has already been making a few appearances at different events in the Keys and he is a great ambassador because who wouldn’t fall in love with this cute little guy. 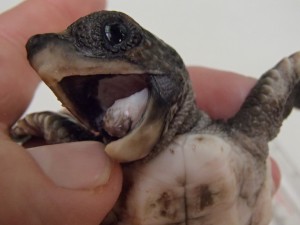 Although we refer to Turbo as a boy, we actually don’t know his gender as he is still too young to tell. Please come visit Turbo and all the amazing sea turtles at The Turtle Hospital and you can learn why we are working so hard to save these endangered animals.