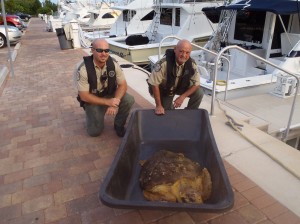 It was approaching the end of the work day on Sunday the 7th, when a phone call came through reporting a floating sea turtle. On the other end of the phone was Kevin and Karen Coats who became concerned after monitoring the turtles behavior for thirty minutes. After realizing this turtle was struggling and losing energy they called us to report the need for rescue. Unable to bring it in on their jet ski, FWC was called and made a quick response to get a rescue boat out to the turtle, near Boca Chica Key. One of the rehabilitation staff made the 45 minute drive towards Key West, meeting up with FWC just as they reached the dock, with Jack, our new sub-adult loggerhead patient. Kevin decided to name him Jack after Captain Jack Sparrow from The Pirates of the Caribbean movie. After Jack’s triage was done at the hospital the x-ray’s revealed an impaction of hard shells, possibly crab.  He had gone a while with out food as an impaction of the intestines causes the turtle to become sick and float. Jack finally caught a break! He is here recovering in a hospital tank where he is receiving antibiotics, fluids, food, and oral medicine to help move the intestinal blockage. Get well soon Jack! 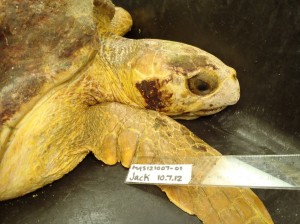