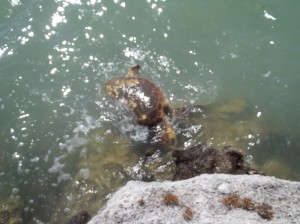 On February 14, Valentine’s Day, The Turtle Hospital received a call about a turtle swimming in circles. Two neighbors in Marathon, Gerry DuBois and Margie Smitch, collaborated as a team to figure out how to help this turtle in distress, in their back yard, the Atlantic Ocean. They did just the right thing by calling us up and we no sooner sent out rescue staff. A quick swoop with the net and a hoist up onto the dock and it was accomplished. Hospital staff noticed right away a fracture on the skull and also the shell. This most likely occured due to a boat strike or some kind of blunt force trauma. 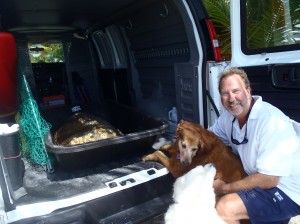 After  Cupid was loaded in the ambulance we took a quick photo of the man who first spotted the turtle and worked on getting it help. Here Gerri DuBois is depicted with his dogs who were there along side the rescue. Since it was Valentines Day, when asked what a good name would be, everyone on the scene decided on Cupid!! Cupid, the sub-adult loggerhead, was brought back to the hospital for x-rays and a full work up. The good news is he is very strong and is in great condition other than his trauma. 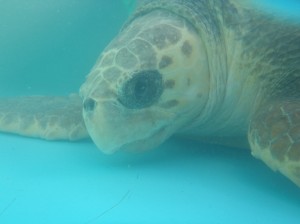 Above is a picture of Cupid safe and sound in his hospital tank. He continues to swim in circles currently and lists up on his left side. These are things we continue to work on with different medications and even a training harness to correct his tilt. Only time will tell how Cupid will progress so continue to stay posted for update on his improvements!