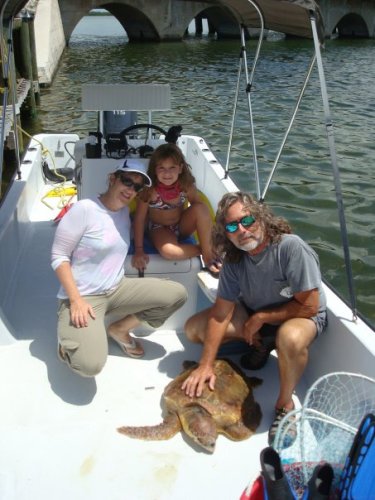 On Saturday August 8th J.R., his girlfriend Emily their neighbor Reese headed out to catch some Lobster. However, they didn’t make it very far… As soon as they left their canal and headed into Bow Channel between Sugarloaf and Cudjoe key, Reese saw something floating by the bridge. Emily thought it was trash, Reese knew it could be something more. Reese had visited The Turtle Hospital with her class and knew that sick sea turtles float so J.R. had to investigate! As they approached the floating object they realized that yes, floating at the surface in this busy channel was an injured sea turtle.  These lobster hunting locals quickly became sea turtle rescuers and called the Turtle Hospital! J.R. brought Turtle Hospital employee Tara out the the sick sea turtle where his girlfriend was waiting with a dive flag to mark the area she was in. Reese, named after J.R.’s young neighbor, was safely caught and brought back to The Turtle Hospital. It appears that Reese is suffering from a minor body cavity infection and she will be treated with antibiotics. Luckily, Reese is a healthy weight and quite a feisty patient! She will hopefully have a quick recovery! 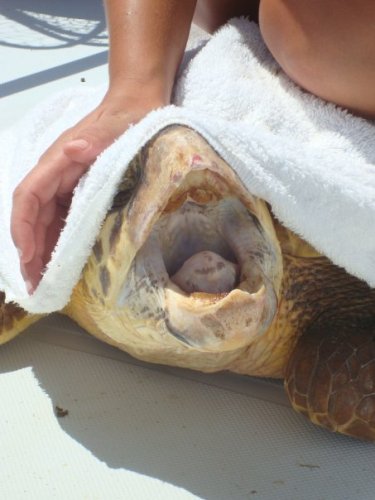