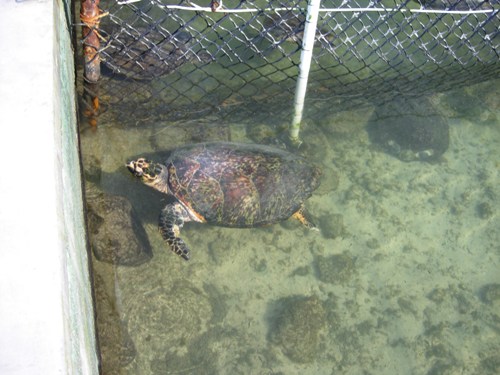 Sandy has been examined by Dr. Mader (Marathon Veterinary Hospital) and he has given her the okay for release! Sandy is able to use her remaining three flippers and is now a very strong swimmer. She will even be able to continue nesting once released! When a female sea turtle pulls herself onto the beach she leaves “tracks” (which look similar to tire tracks.) One sided or one flipper tracks have been documented. Since Sandy is a full grown adult female Hawksbill, we look forward to releasing her soon so she can continue to bring new hatchlings into the world!

SANDY IS BEING RELEASED!

Sandy is flying back to St. Criox, courtesy of American Airlines, on Tuesday October 27th. Sandy will be released from the same beach she was rescued on, one year ago. This will be a momentous occasion for not only Sandy, but for The Turtle Hospital as well. Sandy has had a long rehabilitation here and nothing can compare to the excitement of sending her home!

Sandy was released October 28th from Sandy Point Wildlife Refuge, St. Croix in the Virgin Islands. Sandy’s journey has been long, remaining at The Turtle Hospital for almost a year recovering from the dog attack, but it ended with cheers, smiles and a few tears of joy! The Turtle Hospital would like to extend a special thank you to American Airlines for giving Sandy a ride home! American Airlines was able to provide Sandy and Turtle Hospital Director Richie Moretti and Administrator Ryan Butts free airfare to St. Croix to give us the ability to complete her journey home. This is the furthest we’ve ever traveled from our facility in The Florida Keys to release a sea turtle. USDA wildlife services biologist Toby Hairston, St. Croix Educational Complex student Mohammed Misbeh and Dan Raymond assisted in the release. Hundreds of well-wishers also gathered at the beach to wish her farewell. We would sincerely like to thank everyone who made this event possible

For more on her release in the Virgin Islands newspaper please follow this link:  http://www.virginislandsdailynews.com/index.pl/article_home?id=17640710