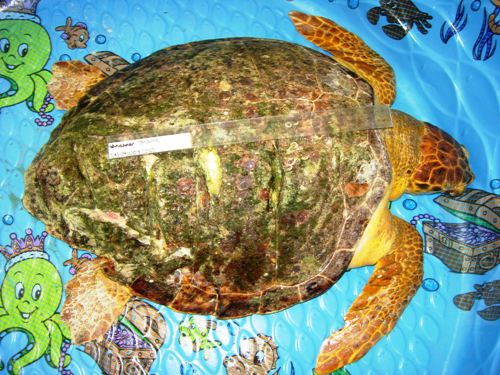 Shane, a 100 pound Loggerhead, was rescued by FWC in Islamorada. Shane, named after former Turtle Hospital employee Shane Catts, was found floating suffering from an obvious boat strike. Shane was mauled by a propeller which traveled down  his carapace, striking him 6 times! Amazingly, Shane had been surviving in the wild for quite some time. All 6 prop wounds have healed and the open wounds have filled with scar tissue. Upon rescue however, staff realized that Shane was left paralyzed in the rear flippers from spinal cord damage and he may possibly suffer from Bubble Butt syndrome.

Upon admittance, Shane was given an x-ray. A large white ball was visible under the carapace around Shane’s right shoulder. A small hole was drilled through the scar tissue inside the prop wound and a large syringe full of water was used to try and flush out the abscess. To staff’s amazement, Shane was full of gravel! The white ball visible on x-ray was a ball of sand, gravel and even some small crabs that had settled underneath the shell when the wounds were fresh. Scar tissue grew over the ball of sand and sealed it inside the shell. Turtle Hospital staff has removed a fist full of sand from inside Shane’s body cavity! 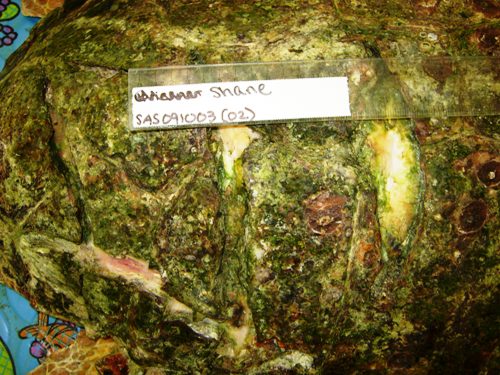 Shane has recently been inducted as our new permanent resident.  Despite treatment with antibiotics and a few months under observation in our saltwater pool Shane continues to float. A small weight has been attached to the rear end of his shell to counteract the buoyancy.