Last year local Lobster Fishermen came to the rescue of an entangled Loggerhead later named Fred. With lobster season upon us, The Turtle Hospital has teamed up with the Florida Keys Commercial Fisherman’s Association to help spread awareness on the importance of sea turtles in our environment. Local Fishermen spend hours out at sea collecting and replacing their traps and are often first to notice if a sea turtle is entangled in one of their lines or in distress. By working together, our local fishermen can assist The Turtle Hospital in searching for sea turtles in need of rescue. 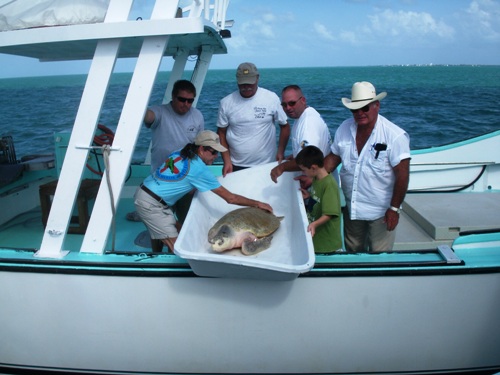 Toni, a sub-adult Loggerhead, had been admitted to The Turtle Hospital with Lockjaw several months prior. Unable to feed herself, she grew weak and was eventually rescued and treated with daily physical therapy. Snoop, an adult Kemp’s Ridley, had been treated at The Turtle Hospital for nearly four years due to a severe entanglement that resulted in the amputation of a flipper and Fibropapilloma. Snoop was a rare case of a sea turtle afflicted with the virus since she was not a Green sea turtle. The virus typically affects juvenile Greens but has occasionally been documented on Loggerheads and Kemp’s Ridleys.

The Turtle Hospital would like to thank the Florida Keys Commercial Fisherman’s Association for joining us on the release and for helping participate in the effort to help as many endangered sea turtles as possible!

To view the video of Toni’s release click the following link: http://www.youtube.com/watch?v=rNHNVr41rBM