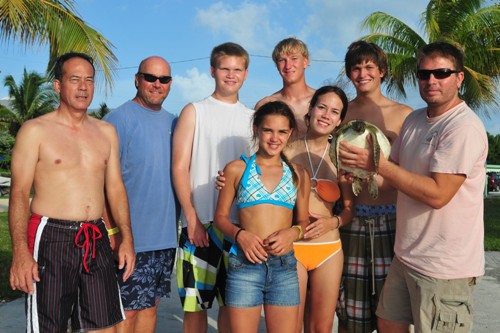 A juvenile Green sea turtle, named Squirt by her rescuers, was found floating off shore. The little sea turtle was struggling to dive and floating sideways at the surface. Back at The Turtle Hospital an x-ray was performed and it was determined that the little turtle had a lot of gas!

Gas builds up in the intestines from sea turtles suffering from impactions which causes them to float. Treatment for little squirt will include a laxative added to her breakfast and Beano added to her lunch. It takes time for impactions to pass but once it has, Squirt can go back to her ocean home!

Squirt has begun passing and absorbing some of the trapped gas which is causing her to float. However she has yet to pass any fecal matter. Severe impactions can take several months to completely pass. As staff keeps a close eye on little Squirt, she spends the day exercising in the shallow end of the pool. Hopefully the added activity will encourage a bowel movement.