Four green sea turtles were transferred to the Turtle Hospital from SeaWorld Orlando on Wednesday.  Because these turtles did not have names upon arrival our staff was lucky enough to pick their own names for them.  Three of the four turtles had been admitted to SeaWorld in the past couple of weeks after they were found floating offshore in Brevard County, FL.  They were later determined to have been exposed to the fibropapilloma virus found commonly in sea turtle species.    Because SeaWorld Orlando does not have the proper permits to rehab fibropapilloma patients, the turtles were transferred to the Turtle Hospital.

Theora was found floating offshore heavily covered with algae and barnacles.  Upon admittance, she was severely underweight and dehydrated.  She was later found to have two small tumors underneath both of her back flippers.  She is currently on a broad spectrum antibiotic and subcutaneous fluids to rehydrate her and will undergo surgery to remove these tumors when stable. 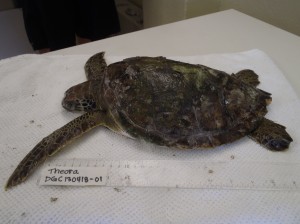 Theora upon admittance to the Turtle Hospital

Chuy was found floating off Satellite Beach in Brevard County, FL .  His left flipper was missing most likely from a predator attack or entanglement.  He also has fibropapilloma virus and will be receiving surgery once stable. 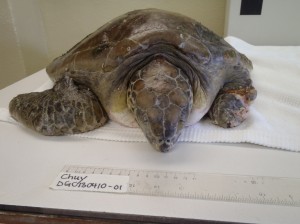 G-Mo was found with a hook embedded in his left front flipper and also had monofilament line wrapped around his neck.  Luckily for G-Mo, the fishing line and hook were removed without any complications.  He was also found with leeches on the underside of his shell.  For the time being, he will be receiving a broad spectrum antibiotic and subcutaneous fluids until he is brought back up to speed. 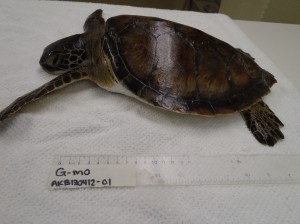 Bernie was originally admitted at SeaWorld Orlando clear back in March of 2011.  Bernie most likely suffered trauma from a wave washing him up against a bank of rocks.  He had a wound on the rear end of his carapace which is now almost completely healed.  He is currently in half a tank of water where his back end appears to be floating on the surface revealing possible gas build up within his body cavity.  Our volunteer veterinarian, Dr. Cathy was here this morning to remove a possible fibropapilloma tumor and take a biopsy to be sent to the pathology lab.  Stay tuned for updates on Bernie along with all of these recently admitted turtles! 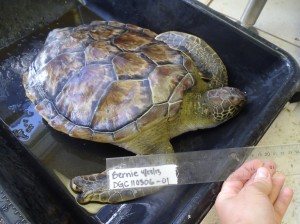