Sydney, a sub-adult Loggerhead, was brought to the Hospital last November after being spotted by helicopter during the World Championship superboat races off Key West. As a precaution, a helicopter is required to patrol the course in order to ensure that sea turtles and marine mammals are not present while the races are running. During the races, course marshal Randy Mearns, spotted a Loggerhead sea turtle floating just outside the course, Luckily, Sydney was not struck by a boat, but was found to have an impacted intestine when X-rayed. Treatment for an intestinal impaction is a combination of Metamucil and mineral oil (laxatives) and antibiotics. After four months of treatment, Sydney was sitting pretty on the bottom of the tank and ready for release! 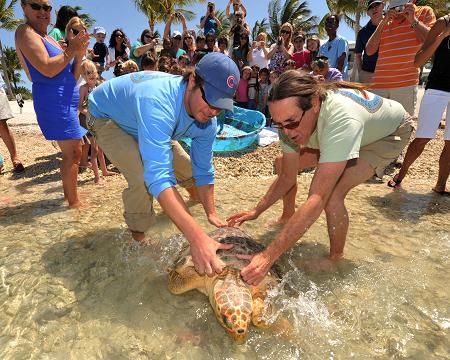 She was transported via Turtle Hospital ambulance down to Key West and was released from Sunset Key. Hospital administrator Ryan Butts and Director Richie Moretti were joined by a local elementary school class to help send Sydney home! The Turtle Hospital would like to sincerely thank Shannon and Diane of Westin Resorts for their assistance in Sydney’s release.