The Turtle Hospital Returns to Cuba with Advanced Technology 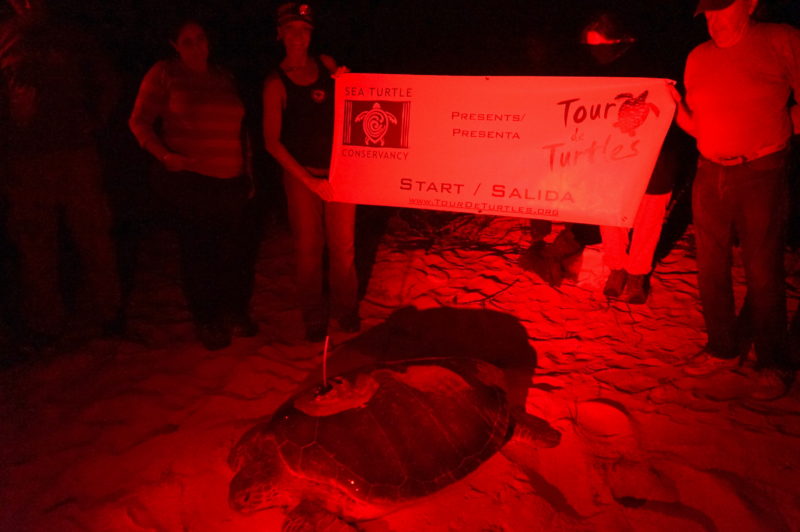 Only 90 miles of ocean, teeming with marine life lies between the United States and Cuba. An ocean that does not recognize political boundaries.

On July 1st, 2016 cooperative efforts of historic proportions resulted in the first satellite tagged sea turtles from a nesting beach in Cuba that can be tracked by the general public on the internet. The Florida Keys based Turtle Hospital and Sea Life Trust each sponsored a turtle in Cuba as part of Sea Turtle Conservancy’s Tour de Turtles.

The tagging was the highlight of the Turtle Hospital’s second Cuba Sea Turtle Expedition. Keys residents, Turtle Hospital Founder Richie Moretti, Photographer and Guide Larry Benvenuti, myself (Turtle Hospital Manager Bette Zirkelbach) and Turtle Hospital Board Member Richard Warner traveled to Cuba this month with a goal: to strengthen partnerships between Cuba and the Florida Keys (United States) to support conservation of sea turtles, a shared marine resource.   The Turtle Hospital has been helping sea turtles survive for 30 years.

We traveled from Key West to Havana by air and then overland from Havana to Pinar del Rio Province in a rented van. Our driver and Cuban guide, Alejandro expertly navigated the mountain roads passing horse-drawn carts on the 6 hour journey to the western most tip of Cuba. We received a warm welcome from Dr. Julia Azanza Ricardo upon arriving at Maria La Gorda, a relaxed beachfront hotel located on the Guanahacabibes Peninsula. We had established a solid relationship with Dr. Julia on our Cuban adventure last year. Dr. Julia, a University professor and field specialist for 17 plus years continues to be a driving force in marine turtle conservation in Cuba. Dr. Julia’s work with the Marine Turtle Conservation Program and the presence of her team on the beaches of Guanahacabibes Peninsula for intensive monitoring of nesting sea turtles has drastically reduced the poaching of turtles and their eggs. Dr. Julia shared stories with us of her recent fieldwork including identifying the sex of turtle hatchlings where the equipment supplied by the Turtle Hospital last year (microscope and slides) proved most helpful.

This year our bags were packed with more advanced medical equipment for Dr. Julia and her team. Surgery tools, a centrifuge, refractometer, hematocrit tubes, syringes and needles for blood collection and processing made up the bulk of our luggage. As you might imagine, these items made going through customs and security at the airport in Havana especially challenging. Fortunately a picture of a CAT scan of one of our sea turtle patients on my MacBook Pro was worth a thousand words and enough to convince the airport authorities of our mission to help with the conservation of sea turtles in Cuba. Blood values help to give scientists a picture of an animal’s health. Dr. Julia and her team now have the equipment to collect blood and get basic blood values from some of the nesting sea turtles in Cuba.

After settling into the resort, we were informed the nesting season on Guanahacabibes Peninsula was off to a slow start with only three nests confirmed through the end of June. An important objective of this trip was to fit two nesting female green sea turtles with satellite tracking tags. After sunset, armed with an abundance of enthusiasm (and much needed bug repellant), we set out with turtle experts from Sea Turtle Conservancy, Biologists from Sea Life Center Orlando, and Dr. Julia and her team along a potholed road of thick forest to the nesting beach in Guanahacabibes National Park. Some of Cuba’s most beautiful and unspoiled coastline can be found here.   Under an amazing starlit sky, we saw the Milky Way and many a shooting star, but not a turtle to be found. The extremely warm temperatures, high humidity, and droves of mosquitos chased us off the beach just before dawn. A few hours’ sleep and a dip in the pristine waters off the white sand beach at our hotel proved refreshment enough and we were en route again to the nesting beach. 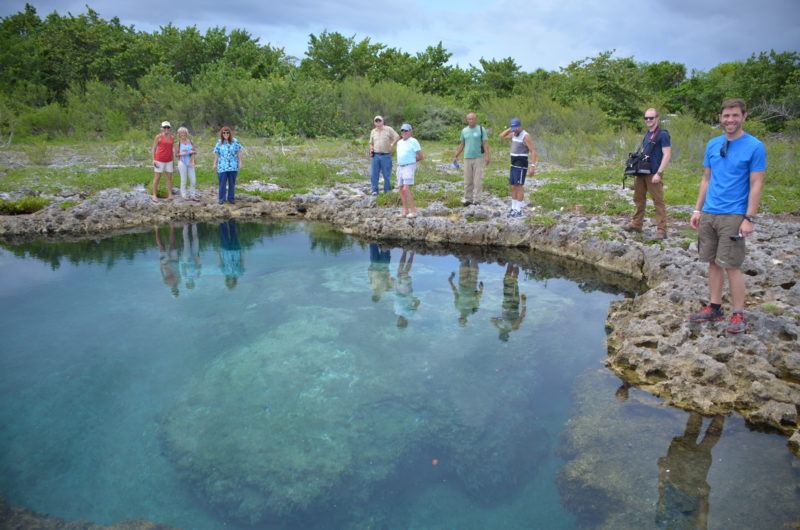 The sun was still high in the sky as we made our way to the entrance of Guanahacabibes National Park. We picked up Roberto, a guide with SNAP, National System of Protected Areas that we had spent time with last year. Roberto gave us an insider’s tour of the park that none of us will soon forget. The Guanahacabibes Peninsula, rich in flora, fauna, and known for its sea and terrestrial landscapes, was distinguished as a Biosphere Reserve by UNESCO in 1987. We hiked rough coral trails Alejandro called “dog’s teeth” because of their sharp jagged edges to a spectacular blue hole where a fresh water river flowed from underground. We climbed a lookout tower with primitive wooden stairs and loose railings, not for the faint of heart, but well worth the climb for the bird’s eye view of the breathtaking landscape. The red head lamps we donned for combing the beach at night for sea turtles came in handy when Roberto took a detour to show us a bat cave and later to spot the glow of crocodile eyes across the water a short distance from a fresh crocodile nest. There was no shortage of wildlife and Larry, our photographer was in his element as he snapped pictures of bee hummingbirds, butterflies, wild pigs and piglets, tree frogs, and iguanas. Richard Warner with his video camera and I with my goPro shot video along the way in an attempt to capture the magic of the Peninsula. A pristine beach, with sand as soft as cream and water temps that mirrored a bath was our retreat before the sun set and our second night in search of sea turtles nesting began.

We suited up in our bug jackets made of screen material, turned on our red flash lights and joined the rest of the group on the nesting beach. Low and behold, there was a gorgeous, healthy green sea turtle digging her nest on the beach! One of Dr. Julia’s research crew was perched next to the turtle carefully counting each egg as it dropped into the nest, 152 eggs in total. The turtle meticulously covered her treasured eggs and moved away from the nest. The Sea Turtle Conservancy team expertly placed a satellite tag on the turtle under the glow of red lights. As the marine epoxy was curing on the tag, I took the opportunity to show Dr. Julia’s team how to collect blood from a sea turtle.   Once the epoxy was set, the turtle instinctively crawled down the rocky beach into the ocean. Before the first turtle was back in water, Dr. Julia’s crew already had spotted a second turtle “Julia” nesting just 50 yards away. The satellite tagging process was repeated when the turtle was done nesting and she swam out to sea just before dawn. Mission accomplished!

Please join us in this fun, educational journey and follow the migratory track of these two turtles by logging onto http://www.tourdeturtles.org and following the link. The first turtle tagged from Cuba is sponsored by Sea Life Trust and named “Esperanza”, the Spanish word for hope. The second turtle tagged from Cuba is sponsored by the Turtle Hospital and named “Julia” after Dr. Julia Azanza Ricardo.

We believe cooperation in protecting shared marine resources is critical to the survival of sea turtles and marine ecosystems. Marine conservation is a topic that transcends national boundaries.

We are back in the Florida Keys caring for sea turtles at the Turtle Hospital. Join us on Sombrero Beach in Marathon on Friday, July 22nd for a public sea turtle release. “Fleming”, a juvenile green sea turtle rescued in the Florida Keys and treated for Fibropapillomatosis at the Turtle Hospital will be fitted with a satellite tag and released as part of Tour de Turtles. Fleming will arrive at the beach in the turtle ambulance at 10:00 a.m., with release promptly at 10:30 a.m. See you there! Compassion is contagious;-)