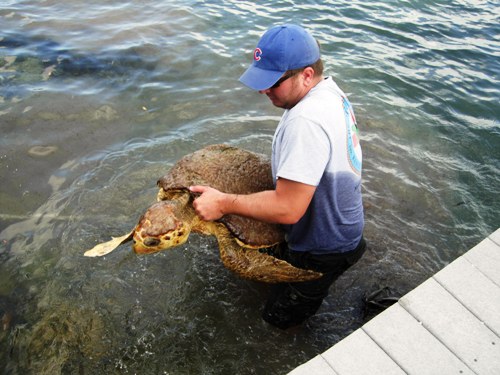 A concerned visitor to the keys called The Turtle Hospital to report a strange situation. A large Loggerhead sea turtle had been sitting in front of her rental home on Duck Key for several days in only a few feet of water. The turtle had surfaced occasionally to breathe but had remained in the shallow grass bed. Turtle Hospital Administrator Ryan Butts responded to the call and easily located the lethargic sea turtle. 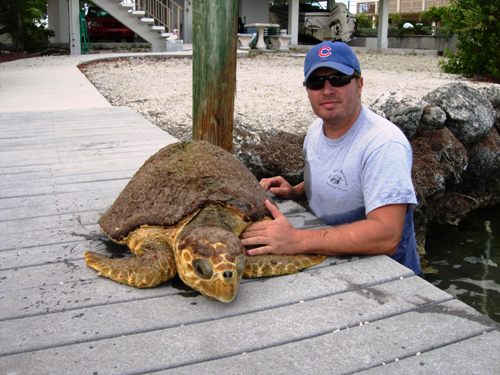 Tomina, named by her rescuer, was brought back via turtle ambulance to the hospital. Inspection of her carapace (shell) revealed that she had suffered an old boat hit and had three healed propeller wounds. The injury left her shell deformed but luckily she does not suffer from bubble butt syndrome or rear flipper paralysis. X-ray’s were taken and Tomina does have a J-hook lodged in her upper intestines and blood work reveals she is also septic.

Tomina will need laxatives to help her pass the hook, antibiotics for the infection of her blood stream and extra squid in her diet to help her gain weight.

Sadly and suddenly Tomina passed. A necropsy was performed to determine cause of death and several abnormalities were found including a large amount of fishing line she had injested which was impacted in her intestines.