On July 7th, 2009 Dr. Doug Mader (Marathon Veterinary Hospital) performed 3 different surgeries on 3 different turtles. First up was Iain. Iain is a sub-adult loggerhead with Fibropapilloma. It is uncommon for loggerhead sea turtles to develop Fibropapilloma, although it has been documented. Dr. Mader did a biopsy of Iain’s tumor to confirm it is FP.

Fin, a juvenile green sea turtle had her remaining Fibropapilloma tumors removed. Fin not only had tumors, but she had also been hit by a boat…right between the eyes! Now that her head injury is completely healed, the tumors were ready for removal. Fin’s tenative release date is 7/7/2010 as long as she has no re-growths. 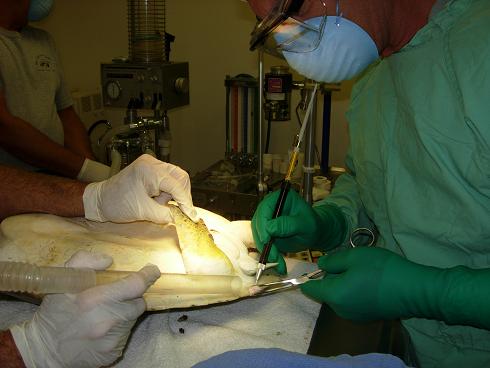 Rockie Thyme was the last patient for Dr. Mader. Rockie is a sub-adult green sea turtle transfered to us from Brevard County, FL because of these tumors. An endoscope showed no internal tumors on her organs so the small external tumors were removed from under her flipper. Rockie Thyme is doing well but may not be released in a year. She also has a propeller injury to her shell, and may be a bubble-butt. At this time there is no cure for bubble-butt syndrome which causes the afflicted turtles to float permanently. 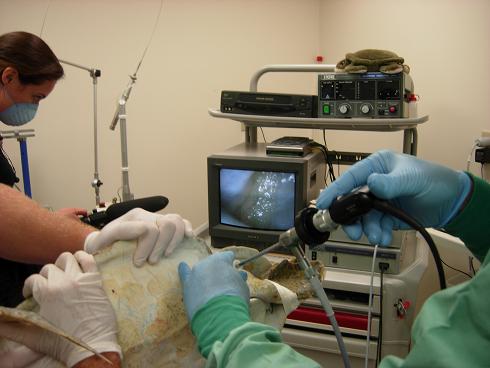 Thank you Dr. Mader for donating your time for these surgeries, and to the Associated Press for documenting the procedure!