Over the course of 3 days, during some of the coldest temperatures on record for Florida, The Turtle Hospital admitted 178 cold stunned turtles (Loggerheads, Greens and Hawksbills). This was on top of our current patient load of 51 turtles. During the coldest weather, we placed the cold stunned sea turtles in 8 of the on property motels rooms (with heaters). 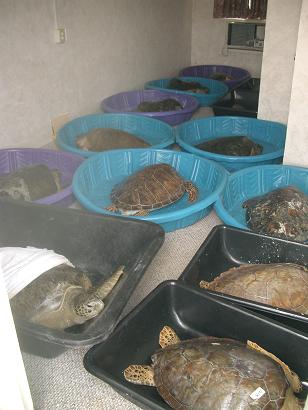 The Turtle Hospital staff also filled the hospital (including the bathrooms) with tubs and pools of turtles. Others were placed in tanks with heat lamps and in our research trailer with space heaters. We activated the two 30 foot tanks (used for hurricane evacuation of our animals from the main pool) and were able to bring up the temperature, allowing the turtle to be placed in water.

In additional to our employees working 12 hours days there was an outpouring of help and assistance from individuals in the community and other organizations. The Turtle Hospital wishes to thank everyone who made donations, both monetary and by providing items desperately needed such as towels, kiddy pools, space heaters and medical supplies.

Special thanks to the FWC, the officers who were picking up stunned animals and especially Sue Schaf, FWC Marine Turtle Biologist who spent countless hours collecting the animals from Key Largo to Key West (at one time bringing 18 in her truck). Sue worked with the Turtle Hospital staff to process the turtles in (reports, weights, measurements, medical care) and to help coordinate the releases when the temperature improved. Other FWC personnel helped with providing boats for releasing turtles and assisting with work at the Hospital. 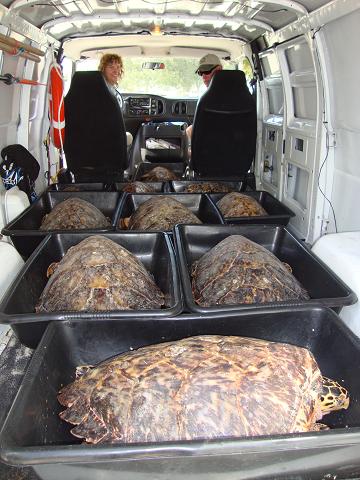 Thanks to Coast Guard station Marathon for the boats and crew used to release the larger Loggerheads, Hawksbills  and Greens out on the reef. 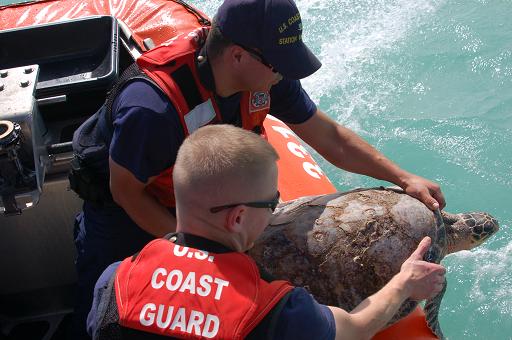 Thanks to FWRI Marathon and Keys Marine Lab for providing boats and personnel used to release turtles into the Gulf.

Thanks to Rick Sall (President of Save a Turtle) for coordinating runs up to Dade County to pick up additional tubs and pools.

Thanks to Katie Rudacille and Hawks Nest Condos for the generous donation of a 40,000 gallon pool heater. This allowed heating the water in our 30 foot tanks which allowed “dry docked” turtle to be placed into water.

Thanks to Patrick Cody from Suburban Propane for the immediate installation of gas tanks, lines and start up of the pool heater.

Thanks to Denny Luppens from Spas Inc. for the donation of time to repair and install pumps required for the large tanks protein skimmers.

Thanks to Doctor Doug Mader for his time evaluating the turtles and providing staff to assist with medical care.

A big Thanks to The Dolphin Research Center for providing a crew and forklift that allowed the larger turtles (up to 285 pounds) to be safely moved into the large tanks and from the tanks to the boats for release. 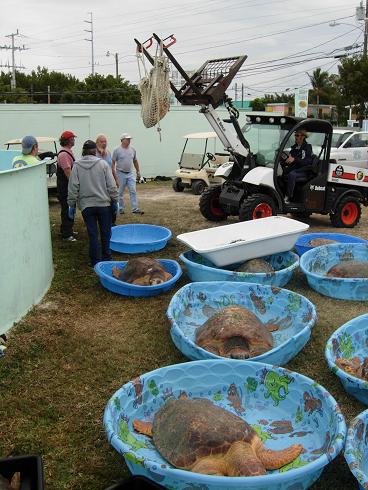 DRC also had crews in boats, picking up and delivering cold stunned turtles to the hospital. DRC provided divers to retrieve the dead fish from our main 100,000 pool, before we could put turtles back. 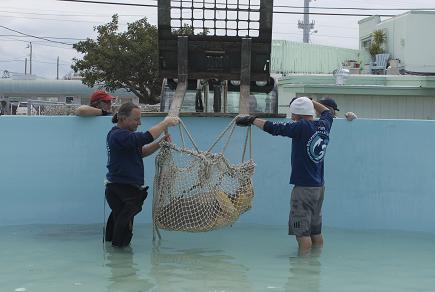 At this time, almost all of the cold stunned turtles have been returned to the water. The exception is any animal that requires additional medical treatment. A number of the Greens (aprox 20) have Fibropapilloma and will require surgery to remove the tumors prior to release. Some of these sea turtles have such a large number of tumors that they will require multiple surgeries. After two long weeks, and hundreds of cold stunned sea turtles released, The Turtle Hospital is currently treating about 70 sea turtles.