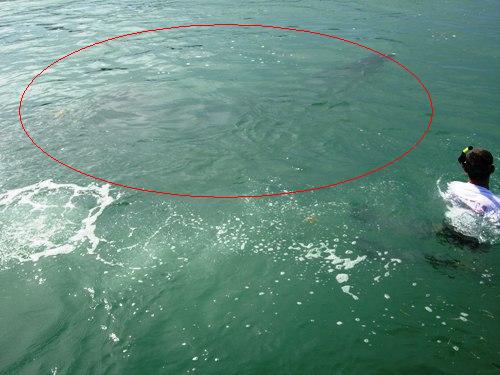 For the last week The Turtle Hospital has been working closely with FWC to help an injured whale shark. It had been reported that a juvenile whale shark was in the vicinity of the Vaca Cut bridge, a very busy channel between the Gulf and Atlantic. Strong currents were bringing in a surplus of plankton and jellyfish, the favorite food of these gentle giants. While in the area, probably feeding, monofilament fishing line had become entangled around the whale sharks tail. This fishing line, over time, could cut deeply into the tail. Lack of circulation could eventually lead to amputation. Without this massive tail, the whale shark could not swim. In addition to the fishing line entanglement, the whale shark had reportedly been hit by a boat. The murky water inside the cut would make it difficult to see the whale shark, even at 20 feet long.

Finally….the call came in that Turtle Hospital Administrator Ryan Butts was waiting for!

Chase Grimes spotted the whale shark on Wednesday July 15th and immediately called Ryan. Ryan jumped into the Turtle Hospital ambulance, picking up Dr. Doug Mader (Marathon Veterinary Hospital) on the way. Chase brought the team out to where he had spotted the whale shark and dropped Ryan and Dr. Mader off in the murky water in front of the shark. The strong currents pushed both men back towards the blur of white spots, in an attempt to grab onto his tail and remove the fishing line. With one stroke of his giant tail, the whale shark easily shook the two men off. Chase, Ryan and Dr. Mader jumped in ahead of the whale shark again and this time? Success! Dr. Mader was able to successfully hold on to his tail and free him from several feet of monofilament fishing line.

Although we hope the injured animal will now leave the busy area, if you happen to see the whale shark please resist the urge to jump in and swim with him. These are gentle animals, but they are giants. Whale Sharks are an endangered species, and it is better for the animals health and safety to admire it from a far. 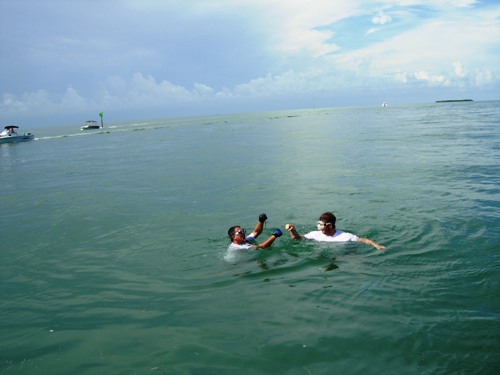 To read more about the whale shark encounter in the Marathon Weekly Newspaper click the following link:  http://www.keysweekly.com/news_articles/view/mission_remove_fishing_line/

To read more about the whale shark in The Key West Citizen click the following link:  http://keysnews.com/node/15275