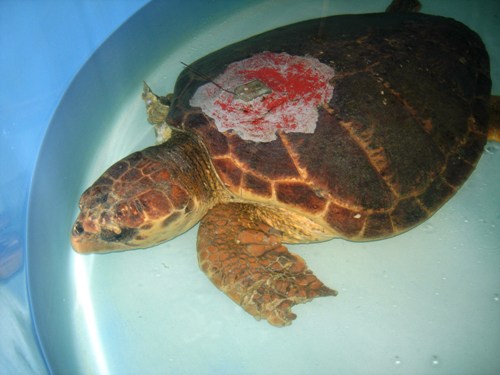 On May 28th, a Loggerhead sea turtle named Wham was custom fit with a satellite tag to record her migration route through the Caribbean. She was tagged by Mote Marine Laboratory and released off of Casey Key, just off Sarasota. Fortunately the turtle had already laid six nests this season, and she was probably in route back to her feeding grounds. The 200 pound adult turtle slowly worked her way towards and around the Dry Tortugas and to Cuba, where she was likely feasting on Conch and Crab. Approximately one week ago scientists from Mote Marine noticed that Wham was taking a strange route back to the Dry Tortugas, while all the other turtles that were tagged were heading towards Mexico.

On Monday, Dry Tortugas National Park employees discovered Wham and realized she was in distress. The turtle appeared to have been attacked by a shark, the only oceangoing predator of an adult sea turtle. Wham was missing most of her right flipper, and approximately 6” of her left flipper. There were numerous other lacerations where the shark was able to get his teeth into the turtle. Park employees diligently brought the sea turtle up on shore and stabilized her until she could be brought into Key West on the Fast Cat and admitted The Turtle Hospital in Marathon.

Wham is now receiving antibiotics, squid breakfasts, and TLC at The Turtle Hospital and a full recovery is expected.Wham is also receiving notoriety in our local papers.

To read more on Wham’s story published in the Keynoter click here: http://www.keysnet.com/news/story/135066.html

To read more on Wham’s story published in the Citizen click here:  http://keysnews.com/node/16390 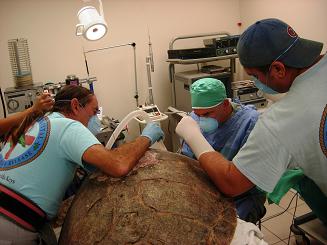 Wham underwent surgery on September 1st to amputate what remained of her severely damaged right front flipper. Dr. Mader (Marathon Veterinary Hospital) performed the surgery, assisted by Director Richie Moretti and Hospital Administrator Ryan Butts.  Wham is recovering well in her treatment pool and receiving all the TLC she needs. Antibiotics are administered to prevent infection and her injuries and surgical site are tended to daily. We expect a full recovery from Wham, and a successful release in the future!

Wham is ready for release! The amputation of her right front flipper has healed and Wham is antsy to prove she’s ready to go home! Wham will be released on Tuesday, November 10th at The Dry Tortugas National Park where she was rescued. Wham will return back to The Tortugas on board the Yankee Freedom, a large ferry boat from Key West that makes daily trips out to The Tortugas. As an added excitment to her release, Wham’s satellite transmitter is still operational, and Mote Marine Laboratory in Sarasota should be able to continue tracking her as soon as she hits the water! 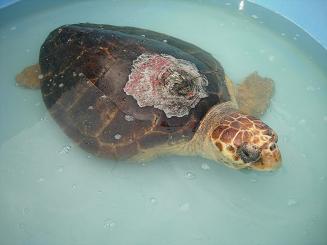 Wham was released November 14th at The Dry Tortugas National Park. After only a few short months of rehabilitation, Wham was driven to Key West where she boarded the Yankee Freedom, a ferry boat from Key West, to return to the Dry Tortugas where she was rescued. Turtle Hospital Director Richie Moretti, Rehabilitation Specialist Andy Dobrowolski, Helicopter Pilot Guy Favart (Air Man Helicopter) and Tom True (EV Parts) released Wham off the beach at Garden Key. With many well-wishers from the Park Employee’s and visitors crowding the beach to say goodbye, she was carried to the water and released back into the ocean. Despite the amputation, she swam in a straight line as soon as she hit the water, not looking back! Wham was more than ready to go home. http://www.seaturtle.org

Wham’s satellite transmitter is still functional and the public can continue to view her track here: http://www.seaturtle.org/tracking/index.shtml?tag_id=94922&dyn=1258753431 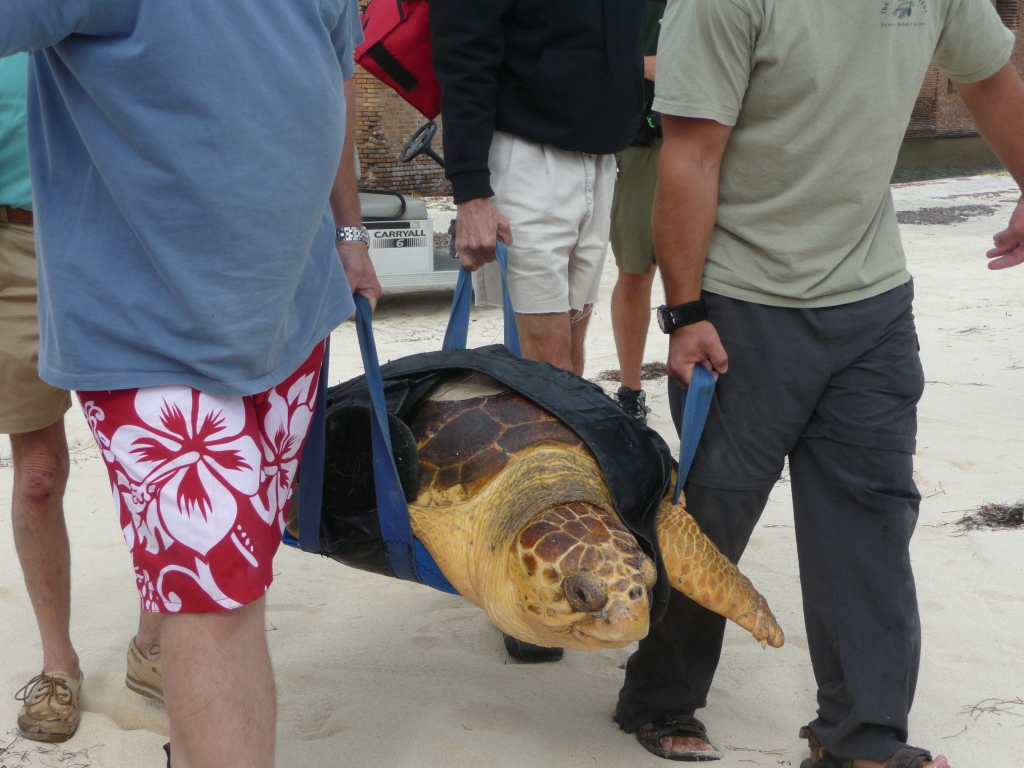